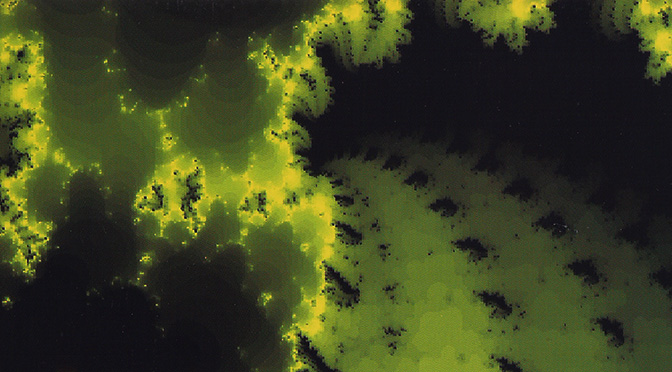 In the late 80s and early 90s, I was more than obsessed with fractals! Since the day I saw beautiful landscape pictures rendered with Vista on my humble Amiga 500, I was addicted to writing simple mathematical routines producing complex images. The philosophy behind fractal math was based on “harmony of contradiction”. You may think of it as a mathematical case where “simplicity defines complexity”.

The beauty of fractals is simply not limited to math. In literary terms, it can be indirectly related to understanding the ways of nature, science, art, philosophy, and even religion. The concept of “self-similarity” can easily be seen in almost every academic discipline. I can honestly utter that it is more than a “Science meets Art” case.

Back to the Future

In 1994 –precisely 20 years ago– I was the Technical Editor of CAD+, an unorthodox CAD/CAM/Multimedia magazine published in Istanbul. Contrary to engineering magazines of the period, CAD+ was beyond the zeitgeist of the early 90s, thanks to Editor in Chief Gökalp Baykal‘s creative, critical and visionary attitude towards publishing.

During those days, my obsession with fractals was already fueled with “Chaos: Making a New Science” (1987) and “Nature’s Chaos” (1990) by James Gleick. As I was fed up with writing hardcore inline assembly routines in Borland C++ 3.1 for faster (and faster!) fractals, I was looking forward to writing some tutorials/articles. So, I took down some notes, simplified them so that even the-man-on-the-street can understand it, rendered a few fractals on my new i486DX2-66 powered desktop PC, and shared them with the editorial team. – They loved it!

To salute the most visionary and unconventional CAD/CAM magazine of all time (well, at least for me), I would like to share 2 articles on fractals that were published 20 years ago in CAD+. Although they are in Turkish, you can still enjoy the artwork. A visual feast for pre-multimedia enthusiasts, if I may say so…