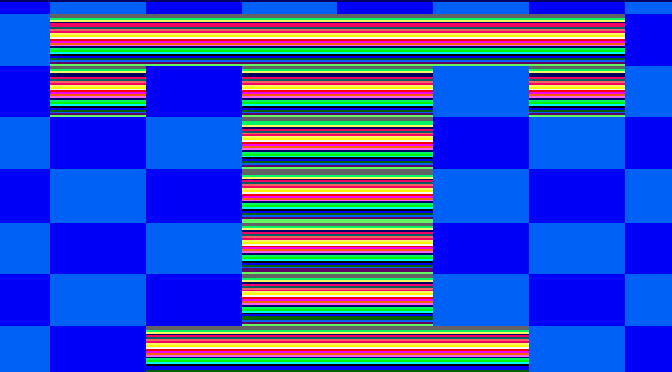 Welcome back to 8-bit days 🙂

The day Alcofribas kindly invited me to the 10th anniversary of 7DX Demo Party, I knew that I had to do something special for this event. Hosting Turkish demosceners for 10 years via enormous amount of hard work and very limited resources, certainly deserves support!

Since there has never been an official Amstrad release before at demo parties in Turkey, I decided to go back to my roots -early 80s- where I used to do a lot of 8-bit assembly language coding. I thought, writing a simple Amstrad intro in 256 bytes would be great. – (Yep, size does matter!)

I did the coding in Z80 assembly language using WinAPE, and tested it on an Amstrad CPC 6128 that I borrowed from Alcofribas. After a few days of PUSHing and POPing, I coded something that looked OK to me. When I e-mailed it to Alcofribas his response was good, but not great. That was an implication of “you can do it better!” 😉 So, I decided to squeeze a few more bytes here and there, while adding more features… And finally, ended up with a much better version. This time, feedback from Alcofribas was more satisfactory; “Oh My God!”

It is a greetings message scroller, featuring silky smooth 50 Hz hardware scroller, overscan display, and complete Amstrad palette (27 colours) on screen at once, all within 256 bytes.

With regards to kind responses from international Amstrad scene, I have released the source code as well. You may find it here at the CPC Wiki website.